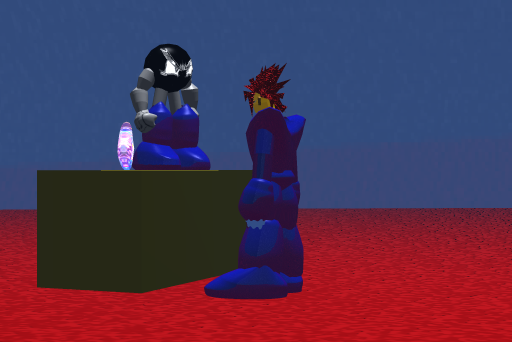 Long ago, before this website was setup and thought of, there was a collection of works I was focused on. In this era, computers were still rocking new standards like CD-Roms and new chipsets that made things like playing MP3 songs possible. It was a time of discovery for me, as I was highly influenced by video games as the leading edge of technology.

In a year after the revolutionary Nintendo 64 had released, I was learning how to recreate scenes I’ve seen, at the moment exclusively on TV, on the computer. How you questioned? I pirated software from the local after school computer program called the Computer Clubhouse when I was just 16 years old. In this time, me and two other friends embarked in learning how to understand and do the impossible on something that nobody ever thought it could work on.

The first system I was managing to use to do such thing was on an Intel x86 processor that was as fast as molasses. It was clocked at 75 MHz, with Shadow RAM memory of 8MB and 4MB of video ram was firstly introduced that was dedicated for special high quality graphics. It contained as well the first mass market hard drive capacity of 1GB. At that time it was unheard of to see such a thing. I managed to fill it up in less than 3 months with all the work I was doing on it.

I was also introduced to JPGs for the first time as the graphic format I had output to was Bitmaps. This of course all for the sake of learning it as I was blessed to be in a lower middle class hispanic family. The software i first used was Macromedia Extreme 3D. It gave me a glimpse of all the trials I would have to face and made me much more strong willed to persevere as it was then riddled with bugs and limits that would make anyone cry for their mother.

It was fun for me to see things fly across the screen and learn what the definition of the shapes and forms were. It’s nuts how so much work I put in and yet, lost a huge set of it due to the hard drive failure years later. It was always hard to maintain and keep things around that’s for sure, but that didn’t bother me much as my focus went in the direction of game creation now.

The Master Sword from the legend of Zelda!